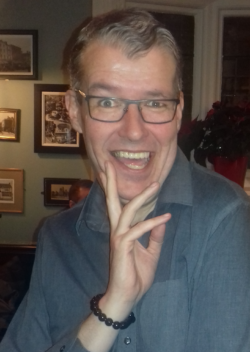 There are numerous reasons why it’s important to have LGBT+ Role Models given that statistics suggest that at least 2% of the population of the UK are either Lesbian, Gay or Bisexual and the ONS doesn’t even report statistics for Transgender, Non-binary or people who identify differently.

As an LGBT+ Role Model I have an opportunity to help normalise the LGBT+ presence here in the university as well as the opportunity to advocate for the LGBT+ community in general and for individuals who have been the victims of discrimination, abuse or even hate crimes.

Coming out as bi/homosexual (I’m still not sure which) after so many years in the closet was an absolutely amazing experience the feeling of elation I felt as the depression which had been dogging my existence since the age of 13 or 14 finally lifted never to return. Coming out to my mother was a nail biting experience I had no idea what her reaction was going to be so I bought a bottle of single malt (My mother likes an occasional whiskey) and sat her down one night when she was sleeping over at mine (She doesn’t like to drive at night and I had a big bottle of whiskey) and softened her up with drink and questions like “Do you remember how I’ve hardly ever brought any girls home to meet you”, “You do know I’ve had hardly any relationships that have lasted more than a couple of months” and “Do you realise I haven’t had a decent relationship for over a decade?”. As the alcohol and my decidedly lame warmup routine appeared to be working I took all the courage I could muster and said “Mum; I’m gay mum”. She just looked at me at first the she gave me a hug and told me she loved me and we both cried a little. The next morning she couldn’t remember a flipping thing so I sat her down and went “MUM! I’m gay!” and she blinked at me and said “I guessed that when you were 16” Face Palm

Coming out in any workplace environment can be difficult. I was lucky when I decided to come out my new manager had just started that week so I explicitly told him first discreet chance I got. After that I think my team had already guessed so I started wearing a rainbow wrist band and rainbow laces to work and just generally outing myself to anybody who asked about them. Everybody has been fantastic so far. I’m also now Co-Chair of the University’s Staff LGBT+ Network.

What I haven’t said so far is that’s just the LGB bit. What nobody at work knows (though obviously you do now) is I’m also Trans and though the University is a very open and inclusive environment the world at the moment is an extremely hostile place for any member of the Trans Community (Where even the Guardian the last bastion of the liberal press is abusing and oppressing us). This is my first toe in the water being out as Trans I’ll let you know how I get on.

I’m lucky my role isn’t customer facing and the university is such an open and inclusive environment that being out and LGB is not a problem here at the University. However, out in the wider world (and even here @ the University) work place harassment still occurs. I have been lucky that it hasn’t happened to me to me here at the University. Being Trans on the other hand has been something that I have completely kept to myself until now. Even here on our massively inclusive campus I feel massively uncomfortable at the thought of publicly expressing any kind of gender non-conformity.

I would urge any member of the LGBT+ Community staff or student who is experiencing difficulties due to their sexuality or gender identity to speak to me, the other LGBT+ Role Models, our LGBT+ Allies, the LUU LGBT+ Society or if they don’t feel comfortable talking to anyone at the University then there are a number of other charities & groups in and around Leeds who can offer confidential advice and support such as MESMAC, Transleeds or even just the good old Citizens Advice Bureau

Don’t make assumptions. Treat everyone with dignity and respect and if you do accidentally make a mistake just make a quick apology and move on the last thing any member of the LGBT+ Community wants is you drawing attention to the fact by making a long drawn out and quite frankly embarrassing apology we just want to be treated as normal people because we are normal!